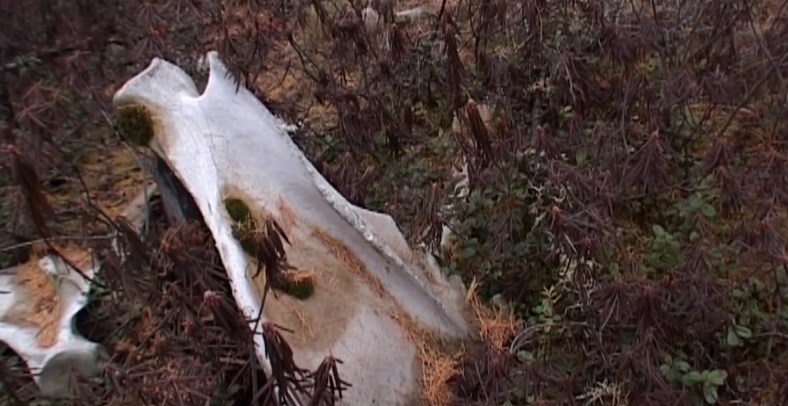 In the face of all this they don’t want to see, Evenki can only silently accept and endure the inner contradictions. They moved in happily in front of the the reporter’s camera, but at night they secretly shed tears under the moonlight.

We translate local audiences’ reviews about issues presented in the film into English when possible. In this way, you can take a look at what local people think about these issues and have in-depth understanding about them. The number besides the reviewer represents how many upvotes a comment/review has received.

Warning: spoilers may apply. To ensure the best viewing experience, we suggest that you watch The Last Moose of Aoluguya first and subscribe now for 20% OFF.

This documentary is clearly from a critical perspective. The unification of the Han ethnic group preserves the ethnic minority, but at the same time makes their ethnic culture disappear.

It is not impossible to protect ethnic-minority cultures from the onslaught of modern civilization. Taiwan is the best example. Music awards in Taiwan now have separate awards in Hakka, Taiwanese, and slang. The Golden Bell Awards and Golden Horse Awards are presented in separate languages. Except during the White Terror Period, students can learn dialects in school.

In addition, the ethnic minorities can still hunt. They still live in the mountains, worship their own Gods, and speak and use their own language. Their children go to school in the mountains, grow up dark and barefoot in the forest… Their ethnic culture has been well preserved.

In order to protect the cultural purity of the Indians, there are also rules against giving them modern instruments.

The Last Moose of Aoluguya is my favorite documentary. It makes us reflect and remind us to respect other people’s culture, starting from respecting their way of life, language, belief and protecting their living environment. Not just taking “ethnic minorities” as cultural symbols and making them into products to be consumed.

It’s better to change sinification into modernization, otherwise the Han people will be tagged with many unfair labels. Sort of reverse nationalism.
Man You You (9)

The moose in the documentary is the desire to born and die in forest. It’s the original longing for fallen leaves to return to the roots and is the native culture of an ethnic group what takes it for granted.

Life in the forest is actually backward, without the civilization of contemporary society. They make a living with forest, and they were born and will die in the forest. Is it true that backwardness and barbarism are bound to be replaced by civilization, and then openly killed under the banner of civilization revolution? If that’s the case, then they are treated unjustly.

There Isn’t Only One Definition of Civilization

Civilization is not necessarily an age of modern automation with electricity and digital technology. A mountain, a lake, a tree and a sea all have their own definition and civilization, but they simply express in different ways. The color of a ethnic group’s pride is also its distinctive side.

It seems that modern people all advocate a neat and uniform world and life, and are guided by the unity of this society. They are used to being flat, being the same, and living peacefully in a world of sameness. The whole system, human being, and birth and death of civilization are in the hands of a reform.

Choosing to respect the autonomy and selectivity of a person, an ethnic group or even a civilized era is a passive identification that overrides the general thinking of contemporary people, but it’s a necessary way of recognition. Respect for what they choose to worship is not like the social voting system in which the minority is subordinate to the majority. Instead, it’s a default existence regardless of place, time, or nature.

Maybe the things that are not meant and respected are just a vague or even incomprehensible concept in people’s minds. But for the person concerned, in the heart of those who take this as their soul, it’s a God-like look.

Almost every sentence of Weijia contains dirty words, which I was not used to at first. But it also shows the true of the documentary — the reality of the Evenki. The main reason is that it is shrouded in a sense of loss and frustration. On the face of it, the Evenki are frustrated or sad as they were forced into the current of modern society and gradually assimilated. On second thought, both sides are helpless. Society will always develop, in which the passive side has to compromise to accept.

Put Ourselves in the Evenki’s Shoes

With the progress of the times, Evenki people became ecological migrants. It is as if they were overnight packed up and thrown out of the forests where they were born, singing, and buried for generations, and placed in the settlements that had been chosen for them. The Evenki, who had not yet adapted, became muddled in confusion and fear, drinking their way through the day. They drugged themselves with alcohol to assuage their guilt at the disappearance of thousands of years of Evenki hunting culture in their generation’s hands. It’s like forcing us, accustomed to modern life, back into the forest overnight. We may be just as confused, fearful, even resentful as the Evenki, and may try to escape.

Ironically, the Evenki have sacrificed their hunting culture for ecological improvements but in vain. It has been difficult to find wild animals such as moose and bears, and the main reason is poaching. In a sense, the Evenki disarmed the mountain, giving poachers a chance. There are no longer people who can find their poaching practices in the vast mountain forest. They are more and more bold, rampant, which leads to lovely creatures in the Greater Khingan mountains being killed.

In the face of all this they don’t want to see, Evenki can only silently accept and endure the inner contradictions. They moved in happily in front of the the reporter’s camera, but at night they secretly shed tears under the moonlight.

See what people say about the Evenki after seeing Gu Tao’s works.

I am Solon Evenki living in the vast grassland since childhood. Now the grassland is not the grassland of my childhood anymore. After watching the documentary I feel very sad but don’t know how to express. The industrial age of the civilized world is shooting at ethnic culture.

They are in the society of drastic changes. They moved down the mountain to live in the new house and left the hunting culture inherited by generations of their ethnic group. Therefore, their attachment to the spiritual hometown seems to be the deepest pain and they are the most reluctant to leave. Their expression of “throes” is also heart-rending.

Their hearts need to be understood, but they are far from being understood. In particular, they need the human concern which is deeply aware of, but this is still missing…

Gu Tao’s documentary is not hunting for novelty. The description of ethnographic documents and the images presented by Gu both show that for a small ethnic group without deep roots and large number of people, the fate of the environment, culture, wine, and people, their historical origins and today’s indissoluble relationship all need our attention, discussion, and proposal to solve the problem.

An Exorbitant Percentage of Deaths

According to the relevant investigation, after the migration of Evenki and other ethnic hunter-gatherers, the percentage of unnatural death due to excessive drinking is too high. The drinking habits of a hunting ethnic group must have something to do with the cold and harsh natural environment, the way of production and hunting, the religion, and the monotony of life and mental anguish. It’s also related to the influence of grandparents’ family and the needs of social interpersonal communication.

Learn more about this documentary by reading interview with Gu Tao.

All the big topics about existence and development make people extremely fearful after carefully thinking about. It seems that the more knowledge we have, the more we are led by the world, and we can never leave the ease and comfort we produce by ourselves. On the contrary, those primitive and backward ethnic groups, the simplest life, the simplest faith, all seem so sincere and happy.

We have known since childhood that backwardness is bound to be replaced by civilization. So what is true backwardness? What is the true civilization? Must life style, material level, and knowledge level be the standard? Are building the settlement of foreign houses for Evenki, repairing cultural square museum, and holding cultural festivals the so-called way of civilization?

The whole world is globalized, every country is learning English, and Weijia is forced by his girlfriend to study with his children. The West developed and advanced. We have to learn their things, and then narrow the distance. However, the West is not necessarily the modern civilization in a lot of people’s eyes.

The people from the so-called modern civilization stand on the edge of the traditional civilization. When they see the primitive life scene, they believe that this backwardness is a kind of suffering. So the modern people become so sympathetic and even try to force them to move quickly into the track of modern society and write their glorious stories in history books. Ironically, this so-called sympathy is nothing more than a sense of superiority and self-satisfaction. Thinking limits the vision. What the eye sees may simply be a shadow in a hole. There’s a living world behind them, but they don’t even know it.

The Last Moose of Aoluguya is the last documentary of Gu Tao’s Evenki trilogy. Read endorsement and issues review about the first film Aoluguya, Aoluguya.

Some people would use this documentary to attack the relevant units. So I don’t know if it’s for this reason, Douban unlisted this film when it was nominated for the Golden House Award for the best documentary.

The Evenki, who were banned from hunting in 2003, live in a state of complete out of mind. A hunter, unable to hunt, would pass the time and worry by drinking every day. Some people say that because of Weijia’s mother’s strong ethnic pride, she has been unhappy that the director Gu to include drunk Evenki in the scene again and again. However, I understand, and won’t equate this group of drunkards with the Evenki. The Evenki see their ethnic group and culture declining, and can’t adapt to the progress and change of the society as a whole. Therefore, they can only get drunk to fill all these huge gaps.

My city’s Yangcheng Evening News also timely published a full page about the Aolugaya Cold Pole Festival. I was full of joy to read a paragraph of the opening sentence, but no longer interested in reading. They wrote: “the Evenki come with their reindeer, dressed as Santa Claus. It turns out that the western Santa Claus has been live in Genhe in China.”

If I were an Evenki who had no control over my own culture, but had to conform to the culture of others because I wanted to survive, I would be disgusted by such a statement.

The Last Moose of Aoluguya is the last documentary of Gu Tao’s Evenki trilogy. Read endorsement and issues review about the second film Yuguo and His Mother.