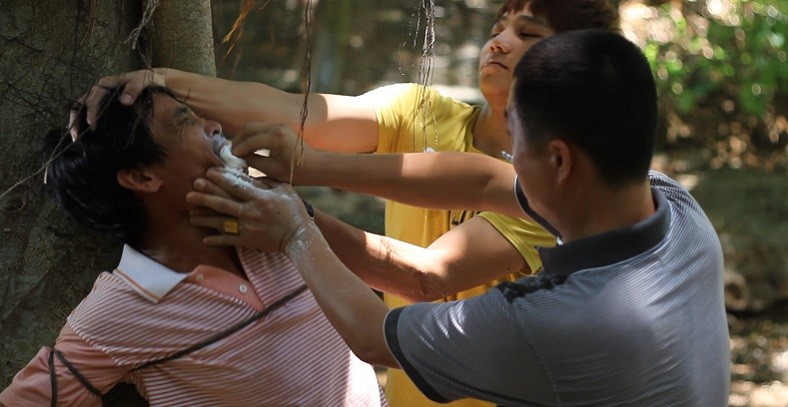 How can a so-called happy event at the cost of a person’s life be real happiness? The higher the joy of those who are numb and unkind, the deeper the grief under the curtain!

Accusation by The Debts

The Debts is an indictment of a group of people who turn a blind eye to crime and shout victory without washing their hands of blood. Throughout the movie, you don’t see any indictments. You can see it as a comedy, you can see the dead person as just a hapless sucker. In life, how many things have not been so downplayed?

How can a so-called happy event at the cost of a person’s life be real happiness? The higher the joy of those who are numb and unkind, the deeper the grief under the curtain! This tragedy is directed at all who live in numbness and chaos, who float and sink in the sea of desire, and who continue to sink and fight. This is the tragedy of whole those people ceasing to live.

Yes, The Debts is an indictment of the numbness of human consciousness as a whole. And, because the target fully ignores, the accuser Wiseman Wang feels more pain. He is in pain for all of them, bearing the pain of the dark part of the whole consciousness.

Read interview with Wiseman Wang. Learn more about how local audiences think about the issues presented in the film.

In many aspects, this movie looks like a documentary. It seems that the actors are not acting, but directly showing their own life. Besides, these are not professional actors, but Wang’s friends and family members. How could they make such a real and natural movie? I really admire them.

Other than that, sometimes I would doubt if Wang also copied the actors’ own life state and just showed them with different versions of stories? When you have a film in which you doubt that the actors’ lives are in line with the characters’, it is clear that the intensity of the picture cannot be surpassed.

No matter how good the story and performance are, the whole movie is simply Wang’s shouting. He is the writer, the director, the investor, the producer, the editor, the cameraman, the chief planner of the whole film and the most important executor. As a company owner, a Xiangsheng performer, a successful businessman with warm family, Wang has a lot of other options. Why does he work so hard to make such a film at his own expense?

Like what the movie reveals, he can gamble, he can become a scammer, or he can build connections. Anyway he can play well in the rules of the social game and reap the rewards. However, he chose to do a hard but thankless job to shoot this film. What gave him such a strong motivation to finish the script in two years, shoot it in two months, edit it and send it around?

It is very brave for him to choose to express and to face. On this point, I really admire Wang. With his skill, a light comedy is a piece of cake, but he is not satisfied with that. He made such a grand tragedy in the form of comedy right away, tearing apart the most horrible and dark corner of the social level. This derived from the pain he chose to face by himself, which is precious.

Would you like to watch this movie after reading its endorsement? Subscribe now to watch The Debts online with 20% off! And stay notified about Asia-related insights & latest offers.