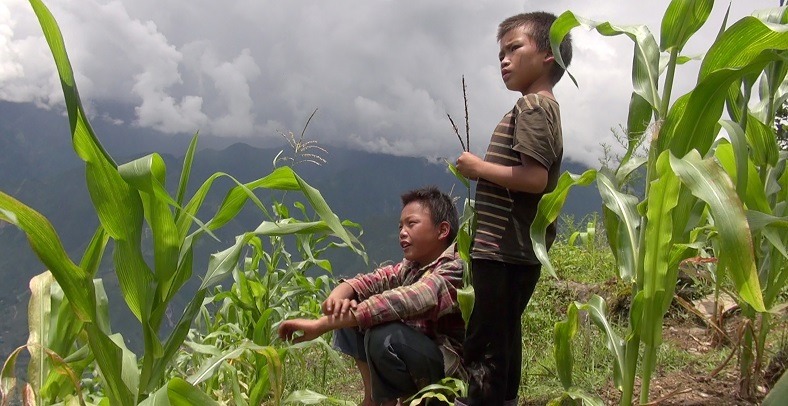 We stand in a highly civilized society and watch their lives with compassion and curiosity. When seeing their primitive life, we look at the edge from the center and use the backward edge as a foil to our modernity and superiority. How cruel it is.

We translate local audiences’ reviews about issues presented in the film into English when possible. In this way, you can take a look at what local people think about these issues and have in-depth understanding about them. The number besides the reviewer represents how many upvotes a comment/review has received.

Warning: spoilers may apply. To ensure the best viewing experience, we suggest that you watch Shang’ajia first and subscribe now for 20% OFF.

In 1958, the national political movement spread to the mountains by the Nujiang River. The Lisu people living there tried hard not to be sent into prison because their religion Christianity didn’t allow them to be a prisoner. They fled over the mountains to Burma, which refused to accept them. For decades, few had accumulated savings from their businesses and moved to the Burmese city of Myitkyina. Most of them stayed in the mountains near the border between China and Myanmar because they had no money. This part of the Lisu people also became Nationals of Myanmar after the official border was announced in 1960.

In 1986, they got the news that they could go home, so they returned to China with their families. After arriving home, they were only told their official IDs (Hukou) have long been cancelled. So they were left in the mountains until today.

There are many scenes in this film showing the indelible real existence from human history. We can’t imagine this. Because far below the mountain we are not only rich but also wasteful. There is more to Shang’ajia than that. As someone asked, why do they have no access to education and no reliable medical care. Then you try to dig out all the losses a person can have, such as nationality, Hukou, and education, etc. Then you think that Jesus’ rescue was a long line of fishing. But the fact is, there are a group of people living in the mountains. Like the aborigines of Taiwan, they have a strong belief in Christianity.
–Mu Wei Er (13)

What TFBoys may not know is that people at their age are singing and dancing their songs on the mountain, eating rats, and relying on the Bible to save lives and go to school.
-Anonymous (5)

The Nujiang River is the blind spot of poverty alleviation in Yunnan province. The mountains are high and the water is far away with steep slopes and deep valleys. It is not suitable for living, but many people don’t want to leave. Many Lisu children come to school and are first taught the habit of washing their faces and feet and taking shower. They love drinking. As long as there is wine, music and rhythm, everyone would sing, dance and smile. For hundreds of years, it was also the first place in Yunnan to believe in Christianity.
-Nei Lu Fei Yu (3)

The children without Hukou in the deep mountains are like a group of small beasts, who understand the world in their own way. I asked the director would these children go out to work or stay in the mountains? He said that those with ID cards go out to work. I’m very distressed. How could they have an ID card without nationality and without Hukou?
Mei Yu (2)

There is the Church of Christ, which had changed beyond recognition when localized. There is also the simple but crude prayer to Jesus. Not only do they fill the gap in the hearts of Shang’ajia people and the absence of hospitals, God has become the refuge and salvation center of their flesh. There is no school but people who taught The Bible and singing. I wonder why those people were turned away and asked the director. He said that he was actually very curious himself. Later, he also learned that not only the Bible but also other things were not allowed to be taught. Even if there were volunteers who organized themselves without bothering the government, they would be expelled. The director didn’t know the exact reason.
–Xiong Ba Bie (1)

A society which is in the same China but doesn’t fit in with our lives. When the children kill a chicken with a knife, abuse a snake, and eat a mouse, what is the difference between them and the Syrian children who kill birds and make bombs in the documentary Of Fathers and Sons? This is their daily life for them. We stand in a highly civilized society and watch their lives with compassion and curiosity. When seeing their primitive life, we look at the edge from the center and use the backward edge as a foil to our modernity and superiority. How cruel it is.
-Chou Si Ben Tu Zi (1)

I envy them, but I also think it’s a pity for them. They do live in a very clean living environment and lead a simple life. But they are not receiving the education they should receive at their age. It is a pity.
-Hua Kai Bu Bai (1)

There will be daily brightness behind the daily suffering.
Braandbra (1)

The Shang’ajia is situated on the Snow-capped Biluo Mountains. They may not have expected to go out but the pop invasion from the outside never stop.
-Chao Ren Shu Shu

Through the primitive and rough image, we can see the current situation and future of the “left-behind children” in mountainous areas. These children of shepherd can’t find their way on the corn land. Nor, apparently, can they follow their instincts or the director’s footsteps out of the mountains, which are higher than one can see. They love the mountain as much as Jesus does, yet their lives are more miserable than Jesus’. Under the influence of entertainment culture, they lose the ability to learn, think and resist.
-Muto

They live in poverty like a wasted life and find it ridiculous. There is no hierarchy in God’s love for his people, but the church of Shang’ajia is so abrupt.
-Xian Xia Ye

‘The Lisu people live in our country, but their life is like another country,’ the director said. They are more civilized than us, he said, because they choose to give someone else when they are “left with only a mouthful of water to drink”.
-Jian Wen

This film shows the primal power. In the process of watching, I constantly compare it with our own behaviors, which is similar to a reflective viewing experience. What is civilization? The director said, in the desert the Lisu people can give water to others, and this is civilization. And do we observe the lives of others with the so-called superiority complex? Does our civilization have a conscience?
-Anonymous

Wild boys are no different from any other animal in nature. It is this law of the jungle that makes them even more exclusive in the face of other creatures in the forest.
-Anonymous

In order to survive, even a young child has to learn to be independent. What we think of as pathetic is just their normal life.
-leflew

Those who have seen the TV show “X-Change” will find these scenes and characters familiar. However, this is not a “reality show” on TV. They won’t have a “happy ending” and they won’t be able to change identities and cross social classes. It may even be difficult for them to get out of this mountain and have a chance at an ordinary life.
-Ju You