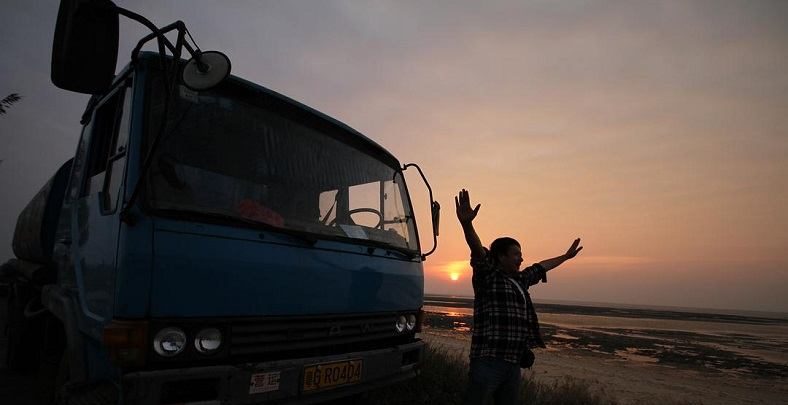 Wang’s dedication let me see a simple but quite shocking film. I can clearly feel the hearts and emotions of the characters. This feeling is one of the few experiences after watching movies for so many years. Thank you Wang!

Hope My Heart Won’t Go All the Way North

Following Bing along the way, I see a lot of things that I can’t see in ordinary life. Wiseman Wang has set the time of the film at the successful Olympic bid in 2001. During that year, the economy developed rapidly, and living standards had been raised, including unreasonable fees and fines.

All this, struck me as absurd at first. Think again, isn’t this the true portrayal of contemporary society? Everything is done for money. Money can do anything. People can lose humanity for money. Reasons can be made up for money. People can become arrogant for money… It’s the money that ties it all together. Even in the end, what made up Bing’s mind is still money! Money has become the only pursuit of this society.

Before Bing started his journey, his heart was warm and soft. Even though there was a lot of pressure on the top of the heart, it was still warm. Along the journey, the heart got colder and colder. Until the end, the heart was cold to stone hard, no longer warm. Just like Bing’s heart went to the north pole, and his heart was frozen. At this point, I fully understand why the title of the film is Journey to the North*. When the warmth goes all the way to the north, it will eventually become cold and hard.

*The Chinese name of the film in English is journey to the “north” while its official English name is Journey to the South. Read this article for more details.

It has been nearly half a month since I watched Journey to the South. The time interval is neither long nor short, but the plot of the movie can still be clearly reflected in my mind. I may not remember the dialogues very clearly, but I can still follow Bing through his life, through all kinds of experiences he encountered, and feel the changes of his mood and his whole person along the way.

At the same time, most actors in Journey to the South are ordinary people. They use real feelings and heart to show us the ordinary life of an ordinary person, ordinary circle of friends and so on. Everyone has a different way of expression, using their own language to express the simple inner.

The story is not complicated. Through the eyes and experiences of Bing, an ordinary person, it lifts the curtain that covers the society. It reflects the cruelty, callousness, indifference and numbness shown by people pursuing profit. It incisively and vividly shows the distorted social values of mercenary and money-oriented as well.

Wang spent a year shooting this film. Meanwhile, he was on the move, photographing, collecting all kinds of information and materials. Wang may not be the best director, but it’s sure to say that he is a very thoughtful and very good director! That’s because when a director really puts his body and mind into a movie, the audience can see, experience and feel it. And that’s exactly what Wang did.

You can see the director’s heart and feelings in the whole movie. When he observes the society from his own perspective, he can also get away and stand on another angle and more dimensions to observe, consider and discover the hidden things behind the society.

Wang’s dedication let me see a simple but quite shocking film. I can clearly feel the hearts and emotions of the characters. This feeling is one of the few experiences after watching movies for so many years. Thank you Wang!

Synchronizing Reality in the Name of Art

Through this film, I once again see “minority”. Minority not only refers to people, such as Bing, children, people without money and power, but also refers to many behaviors, such as thinking, dignity, resistance, culture, independence, and so on.

Learn more about how local audiences think about issues presented in Journey to the South.

I also looked up this movie on the Internet and saw a sentence that said, “is this movie a performance? This sentence is interesting and I feel the same way. Except for the same question, my another question is: The movie does cover a large area of people, but what positive energy does it sublimate?

It is certainly not a pastime. It’s a very serious movie about social and human problems and is Wang’s masterpiece of careful thinking and planning. But as an ordinary audience, I think the angle of the question is not to understand that it is not easy for the director, but to get something from it. Well, I see the same sorrow, the same sigh, and the same fate, but then what? What do we do when we’re born in it? As a weak, how to make his live more dignified? As a life, how to protect his own memories and feelings? Maybe Wang would say, yes, your many questions are the fruits of my movie.

Would you like to watch this movie after reading its endorsement? Subscribe now to watch Journey to the South online with 20% off! And stay notified about Asia-related insights & latest offers.