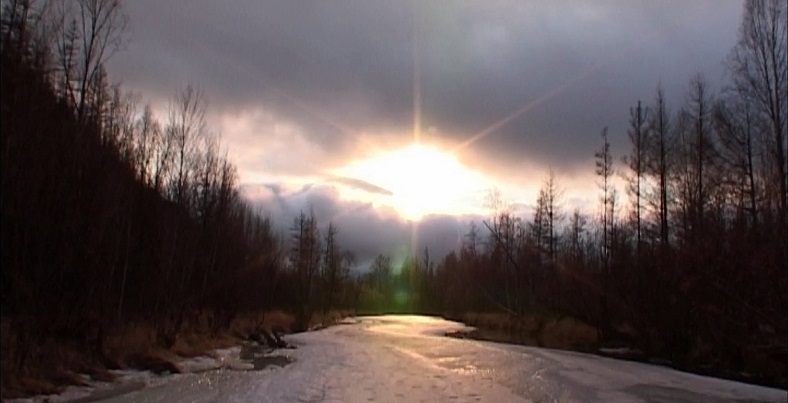 Seeing the Evenki’s roots are towed away by the modern civilization, the older generation can only use their eyes to watch all this sadly and helplessly. Who should the long-standing Evenki culture be passed on to?

Table of Contents hide
1 What the Light of Civilization Brings to the Evenki
1.1 The Advantages
1.2 The Disadvantages
1.2.1 Not Used to Anything
1.2.2 The Disappearance of Traditional Culture
1.2.3 Impact of Ban on Hunting
1.3 The Conclusion
2 The Need to Record the Minority Culture and Custom
3 Success of Gu Tao
4 Seeing the Evenki

Besides filming, Gu Tao inherited his father’s diary practice. His diary kept many things that were not recorded on video and was published as a book “The Land of the Sad Reindeer”. Here are what people think about him and the Evenki after either watching the Evenki trilogy documentaries* or reading the shooting diary book.

*The Evenki trilogy documentaries are Aoluguya, Aoluguya, Yuguo and His Mother, and The Last Moose of Aoluguya.

What the Light of Civilization Brings to the Evenki

What does the spread of modern civilization bring to people? The answer to this question for different people, perhaps is not the same.

For people like us living in the city, it is undoubtedly the light in the dark night. Light goes through the dark and brings endless brightness for our life. But for the Evenki reindeer herders who live in the north of the original forest Aoluguya and makes a living with nature, is the situation different?

There is no denying the power of modern civilization. When the convenient roads are paved to the Evenki, they can get rid of the pain of making a way in mud and thorns. They experience the handy light at night when warming lamplight shines above the “Chum” in the evening. When the magic boxes of televisions are installed in the Evenki’s houses, they can peep at the outside world which exists at the same time. In this case, the spread of modern civilization indeed brings substantial changes to the Evenki’s lives. We can thus come to the conclusion: the spread of modern civilization promotes the progress of human society and brings brightness to human.

Not Used to Anything

For the Evenki to live a better life, the government arranged that those living in the mountains should relocate to new houses down the mountain. The government hopes to gradually integrate the Evenki into modern life and shed the light of civilization on this original ethnic group. However, the older generation of the Evenki can’t get used to the change at all.

They can’t accept the small, closed, and dark new buildings, and living in such a “home” makes their joints ache. Leaving the forest makes their reindeer homeless as well. Confinement rearing is a nonsense in their view. The Evenki and their reindeer are already children of the forest, and they can’t live the arms of the forest. If they are forced to the welfare policy from the government, they fall into endless pain instead.

The Disappearance of Traditional Culture

On the contrary, modern things has a huge attraction for the younger generation of the Evenki. Many Evenki children yearn for game machines which are only available down the mountain. They prefer playing games there to the hard days of finding reindeer, chopping firewood, and making a fire in the mountain. Seeing the Evenki’s roots are towed away by the modern civilization, the older generation can only use their eyes to watch all this sadly and helplessly. Who should the long-standing Evenki culture be passed on to?

Read endorsement and issues review and subscribe now to watch Yuguo and His Mother online with 20% off! And stay notified about Asia-related insights & latest offers.

Impact of Ban on Hunting

In addition to the “welfare” from the government, the ban on hunting in 2003 was a death blow to the Evenki.

Maria-Suo, the last chief of Aoluguya, said sadly “whenever I think of the Evenki having no gun and nowhere to put the reindeer, I just want to cry, even in the dream I’m crying.” As a hunting tribe, shotgun is their life. It’s also a warm and comfortable existence flowing in their blood. From ancient time and present days, from Russia to the Greater Khingan mountains of China, as long as there is a footprint from the Evenki, there must be a shotgun. The Evenki fight against brutal black bear to defend the reindeer and their homes. They would also go hunting with the shotguns, but not without a restraint. Instead, they follow the natural rules to live a self-sufficient life in peace and harmony with nature.

But in 2003, from the moment the police took the Evenki young hunters to the court, everything changed. They were not allowed to own guns anymore, and their most needed tools to make a living were confiscated. The Evenki who were not able to fight back seemed to become the puppet without soul. They lost something which their ancestors passed down. Maybe nobody would know it was the shotgun they lost or something else.

The fact since that was many Evenki people had nothing to do and started drinking. When hunters saw their world destroyed little by little and they couldn’t help it, alcohol had become the most powerful thing. Alcohol can help them escape from things they don’t want to face and paralyze their painful heart.

Now, can we still say that the spread of the modern civilization has brought brightness to the Evenki?

Read issues review and subscribe now to watch The Last Moose of Aoluguya online with 20% off! And stay notified about Asia-related insights & latest offers.

I think none of us have an answer. The light of civilization inevitably would spread to every corner of China. We sympathize with the Evenki’s experience, but we can’t retort on the correctness of the gun control instructions. When the “advanced” modern civilization collide with the “backward” hunting civilization, what should we do to strike the balance of benefits? It is wrong to make a decision for someone else. Given happiness is not necessarily good, even if the other party is out of kindness. People also have the right from the relief.

However, no one is an island that can seek betterment of himself only, not even the isolated Evenki. Even if they try their best to build a protection wall, the light of modern civilization light will swoop in one day. By then, where should the Evenki culture go from here?

May the light of Aoluguya never covered by the modern civilization.

The Need to Record the Minority Culture and Custom

China is a multi-ethnic country. Each ethnic group shows its own lifestyle and cultural characteristics. The individual presentation and blend between different ethnic culture form the splendid Chinese culture. But in the process of changing and development of the social system and the inheritance and change of every ethnic group, there is also recession and disappearance in ethnic culture. Therefore, documentary is especially important for the record of minority culture.

Director Gu’s attitude, ideas, and style of creation produce certain positive inspiration in making indie documentaries about ethnic minorities. Gu’s deep feelings and comprehensive understanding about ethnic minorities is the premise of his creation. Besides, his sense of responsibility of saving the dying ethnic culture is the guarantee of success. On the other hand, he brings attention to more people and calls upon saving our diversified ethnic culture. This is done through such documentaries with the purpose of “recording”, “displaying”, and “questioning”.

Read this blog post to learn more about Gu Tao and his Evenki Trilogy documentaries.

I follow the footsteps and lens of Gu Tao to see the moving details flooded in the grand background. I see the Evenki taking care of the reindeer carefully, and I feel the power of faith, a kind of more generous understanding of life and human nature. It is a genuine shock from the heart and the resonance of the soul.

They chose the forests and reindeer, exhausted all their strength to defend the homeland. It is their strong guard which lets us see such a group of pure people, the tough life in snowy Greater Hinggan mountains, and the last reindeer culture in China.

The holding to faith generates great strength in the Evenki reindeer herders. Gu Tao spends ten years’ time and efforts and overcome all the difficulties to finally record all these faithfully. In the beginning of his career, however, he used to encounter challenges and feel lost for a long time until he found the direction of his dream. Trekking along the way, he got closer to the expected himself step by step. Eventually, he lived up to his own life value of becoming a respectable practitioner of ethnic cultural inheritance and protection.